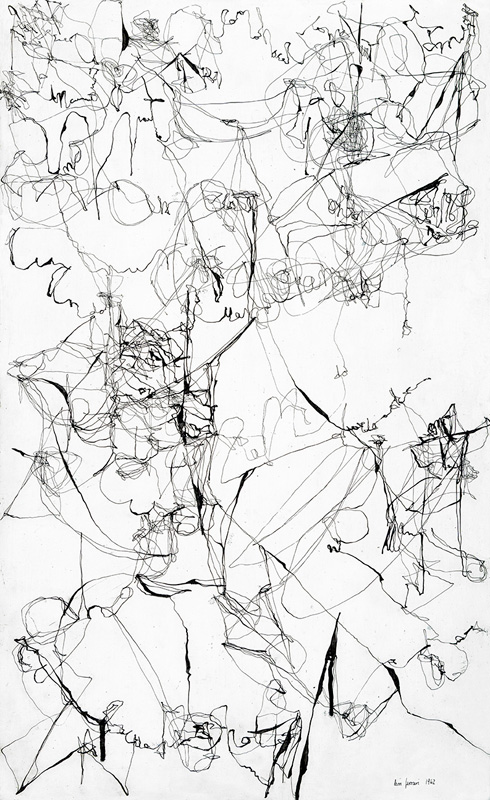 Biography (1920 – 2013)
Born in 1920 in Buenos Aires, León Ferrari was a self-taught artist who became one of the foremost pioneers of conceptual art in Argentina. His artistic practice includes painting, collage, sculpture, poetry, and printmaking. In the 1950s, Ferrari travelled repeatedly to Italy, where he began working with sculptures. In the early 1960s, he explored the connections between word and line in Cuadros Escritos (Written Paintings) and Dibujos Escritos (Written Drawings). These abstract “writings” on canvas and paper combined dry pastel, graphite, watercolour, and coloured pencil to make lyrical, almost calligraphic imagery. About them Ferrari wrote, “I draw silent handwritten words, which tell things with lines that recall voices. And I write drawings that recite memories that words cannot say”.

In the late 1960s, Ferrari participated in the group “Tucumán Arde” which intended to draw attention to the poor political and economical conditions of the Province of Tucumán. During this period of increasing political activism, Ferrari published what would become a famous manifesto and call to- arms for artists, in which he wrote, “Art is not beauty or novelty, art is effectiveness and disruption…” After the persecution and disappearances of his family members and friends, Ferrari fled to São Paulo. Upon his return to Buenos Aires in the early 1990s, he created a series of collages to illustrate the official report about the disappearance of Argentineans during that period.

In the last years of his life León Ferrari’s work was widely exhibited internationally and in Argentina. His retrospective of 2004 at the Recoleta Cultural Center in Buenos Aires earned him world-wide attention when the exhibition was closed and after reopened by the Buenos Aires Government. In 2006 he was a Special Guest at the São Paulo Biennale and in 2007 he was awarded the Golden Lion at the 52nd International Art Exhibition, Venice Biennial. In 2009 his work was the object of a large retrospective alongside Mira Schendel at The Museum of Modern Art in New York (MOMA). He died in 2013 and is remembered as one of the most controversial artists of his lifetime and a pioneer for conceptual art.