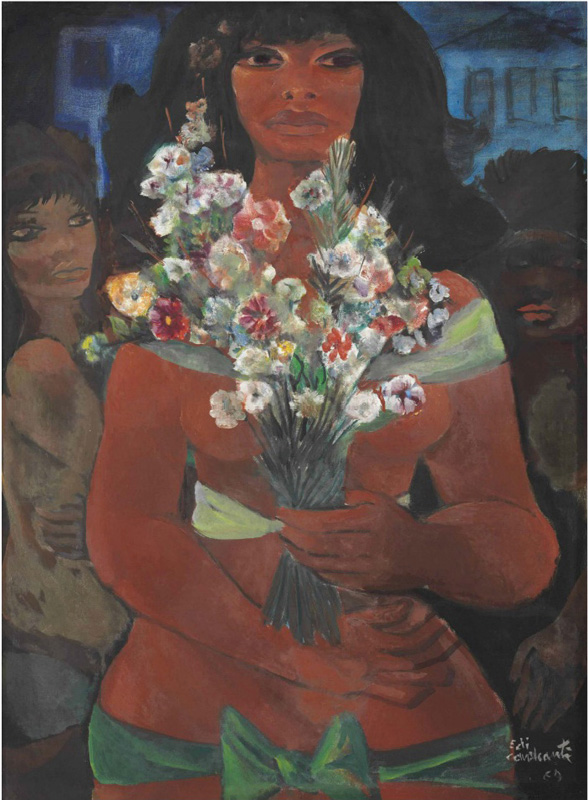 Born in Rio de Janeiro in 1897, Di Cavalcanti was a painter and an illustrator. He had his first exhibition of caricatures in 1916 at the Salao dos Humoristas at the School of Arts and Crafts of Rio de Janeiro. He studied law but soon abandoned his studies to devoted himself to art. From the beginning he rebelled against the dominant academicism present in Brazilian Art.
As member of a young group of revolutionary artists he played a leading role in Semana de Arte (Modern Week Art), an inaugural week-long cultural event held in São Paulo in 1922 that marked forever the Brazilian modernist movement.

In 1923 he traveled to France where he met with Picasso, Max Ernst, and Fernand Léger, their innovative style influenced him deeply. He used the visual language he encountered in Europe to depict the Brazilian people, their traditions, music and carnival festivities. Upon his return to São Paulo in 1926, he joined the Communist Party, and like other Brazilian artists of the time sought to conciliate their artistic production with a more pronounced social commitment. He soon became one of Brazil’s most renowned artists. In 1953 (along with Alfredo Volpi) he  won the São Paulo Biennial, and a year later he was honored with his own retrospective at the Museum of Modern Art of Rio de Janeiro.